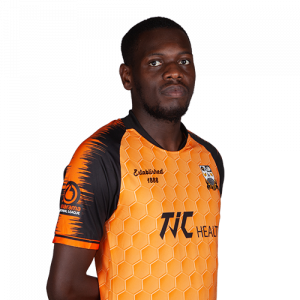 Midfielder Wesley Fonguck was a youth talent picked up by Barnet from local side Croydon and went on to graduate from the youth academy, making his first-team debut as a substitute in May 2016 against Crawley Town.

Originally training with Crystal Palace, he’s always stayed local to London, enjoying loan spells at Hendon and Hampton and Richmond Borough. Despite first-team opportunities being limited after his loans, he did make his first start in the Football League against Grimsby in the penultimate game of the 2016/17 season.

Fonguck has been all but ever-present in the Bees squad since his debut and can be a crucial player in the creative role. Wes also has featured for the England ‘C’ team and will be looking to gain more international recognition, as well as continuing to impress in a Bees shirt.