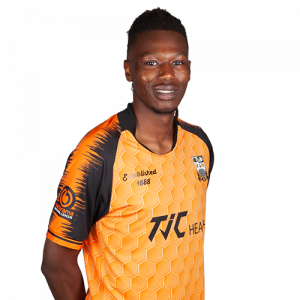 Sesay was offered a one-month rolling contract in the Summer after a successful trial period with the Club.

Having been born in Brent, Sesay came through the Watford FC academy before penning a permanent deal with League Two side Crawley Town in 2018.

He made his Red Devils debut a few weeks after signing for the Club against Tottenham Hotspur U23’s in the Papa John’s Trophy, where he finished the match by scoring the winning penalty.

At the end of his first season in Sussex, Sesay was handed the Club’s Young Player of the Year award.

The 22-year-old was a regular within the squad at the People’s Pension Stadium as he went on to make 70 appearances across three seasons at the Club, before getting released this Summer.