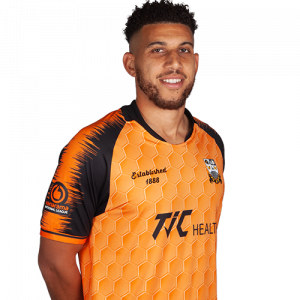 Daniel Powell joined the Bees on a two-year deal in August 2021, after spending the previous two seasons at Crewe Alexandra, where he scored 12 goals in 60 appearances.

Whilst at the Mornflake Stadium, his goals helped to secure promotion into League One, before turning out 24 times for the Club during their first time in the third tier for five years.

The versatile winger is a product of the Milton Keynes Dons academy and played his first senior match in 2008, aged 17, netting the Dons’ third goal in a 3-1 win over Hartlepool United.

A successful period at Stadium MK followed for Powell as he went on to make 271 appearances, scoring 46 times and assisting 21. During his time in Buckinghamshire, the attacker also had brief loan spells with Crawley Town, Forest Green Rovers and Darlington.

Following his release by MK Dons in 2017, Powell made the move to Northampton Town where he enjoyed two seasons, clocking up 73 appearances adding a further eight goals to his tally until joining Crewe Alexandra in 2019, where he spent a successful two years before his release this summer.