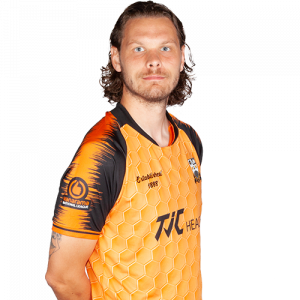 The 6ft 5 inches defender came to the Club with Football League pedigree, having made 222 senior career appearances to date.

The 27-year-old has played for the likes of Cardiff City, Brentford, Peterborough United, Gillingham and Stevenage.

After starting his career in non-league football, Nugent made a move to the Welsh capital as he joined Cardiff City. He was part of the Bluebirds side that secured promotion to the Premier League in the 2012-13 season. After tallying up significant Football League experience, Nugent joined the Bees following a successful trial period, following his departure from Stevenage at the end of the 2019-20 season.