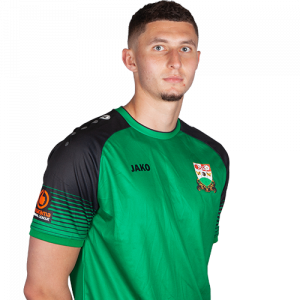 The Norfolk-born goalkeeper signed a season-long loan from Norwich City on the 31st of August. He became the second stopper to join the Bees in August after Sam Sargeant signed a loan deal with the Club just over a week before Oxborough did.

Oxborough came through the Canaries’ academy after being scouted by the Club whilst he was aged 12.

An England call-up soon followed for the goalie as he went on to make four appearances for the national team’s U16 side.

During the 2019/20 season, the 6ft 5ins goalkeeper was sent out on-loan to Wealdstone, who were playing in the Vanarama National League South. During his spell at Grosvenor Vale, he made 27 appearances for the Royals.

Since then, the 23-year-old has made a number of appearances in the Premier League 2 for the Norfolk-based side, but a lengthy injury has kept him sidelined for the past year.